“We were laughing and living, drinking and wishing, /And thinking as that checkered flag was waving, Sure would like to stay in Talladega.” –Eric Church, Talladega

It was a late summer evening, and although it was technically too hot to, I had cooked. My younger daughter, Abby, liked the anchor of a family meal, and my older daughter April’s boyfriend liked my cooking. Long dinners were our Thing for those last several weeks before September made us into the school-year flotsam and jetsam that we so often became.
Our family dinners were a marvel to me. My alcoholic, bipolar mother had seldom cooked. Food–whether it was greasy, lukewarm roast beef or the more standard Burger King Whopper Jr.—was swallowed quickly and our back-to-bedroom escapes were made. Dad, who dubbed himself “Fate’s Whipping Boy,” ate late and alone at the Formica-topped bar in the kitchen. Whichever child chose to emerge and join him would be treated to sardonic stories of his gray day as they swiveled on the sticky faux-leather bar stools. There was nothing warm and Ingalls-y about our mealtime; no passed potatoes, no humorous stories, and very little daily minutiae was shared with nodding and clucking adults.
I exulted in the fact that my daughters expected family dinners. Our table was the first piece of furniture we bought as newlyweds; the chairs were given one by one as Christmas gifts by relatives. The twenty-four year-old chairs, saggy, scuffed, and stained, were no longer prizes; the tabletop, faded and worn from the thousands of meals we’d enjoyed, was no longer fit for the Haverty’s showroom. My now-adult brothers, on separate occasions, each reverently stroked the tabletop and said, “You can almost see the stories that were told here,” in recognition of my treasure.
On Sunday nights, I’d holler, “Who wants what next week?” and each girl knew she could count on one favorite food—Chicken Parmesan, gluten-free pizza, chocolate-chip pancakes—at the end of each weekday. April’s boyfriend, who was hundreds of miles from his mother’s home cooking, occasionally joined in, politely requesting fried okra or red velvet cake. He would smuggle the leftover slices home past his thieving roommates, who especially favored the walnut cream cheese frosting.
The days that ended at the table were days that were bookended by laughter and long talks. We would talk about Marxism, basketball, and Eric Church—one night, as if to show just how weird their mother was, April and Abby allowed me to explain why “Talladega” was the best song ever written, discussing it line by line. Everyone laughed at my sentimental tears over “the summer before the real world started.”

The girls would tell stories of broken arms and field trips, of Camp Winshape and hikes and horseback rides. I’d clear the table as they prattled on, Abby enjoying her traditional York Peppermint Patties and milk while Greg snuck a little ice cream.
So it was this customary evening. We had eaten well and laughed hard, remembering how when we’d asked young April her dolls’ names, she would cackle, “Rubbish and Trash.” We’d recounted her cross-country airplane trip alone at age six where she’d poured Sprite–quite deliberately—down the pants of her middle-aged seatmate, a woman who’d called her a chicken. Dinner was endless, and as we sat there afterwards, I heard a clear voice within me say, “You will never have this again.”

I froze. I knew the voice.

In 2001, when I’d heard Greg was in the hospital after a routine doctor’s appointment revealed iffy blood test results, as I desperately said, “Not leukemia” to myself over and over, I heard the voice say, “It is leukemia, but I will perform a miracle of peace.” And these words proved true.
To hear that voice so clearly fourteen years later, clearly and certainly bringing sad news from nowhere –I can’t emphasize enough the nowhere—shook me. I looked at each of the four of them, chortling at the latest story; I took in the dishes and the lighting and the way their smiles shone. They were all so happy. There was joy in the room, hilarity even. It had been a good meal, a great time, and, evidently, the last one, ever.

As I sat there, forty-five, haggard, prematurely gray, having endured much, I can clearly recall a desperate grasping within me, an urge to fight, to say no. I wanted to resist whatever torture was ahead, and I wanted to begin immediately. Post haste. To stand and fight and claim good things–for surely, having lost so much, we deserve to enjoy good suppers. How could that be too much to ask? For a minute, I was like my former students, who now as young new mothers, are trying to perfectly order their children’s and families’ worlds. I felt myself reverting to a time when I naively thought that I could change and save things.
But I was only there a moment.
I acknowledged the voice. I told it, “Well, then, I’m going to enjoy tonight.” I refilled their glasses, grabbed dessert, and we sat long and laughed much. So much. I watched their faces, held their hands, marveled at the blessings they were.

It was a truly beautiful night: we were so rich.

There is no explaining how quickly everything has changed. A break up, an unplanned rebound pregnancy; one move, then another. We were five, and we are now three. And supper at the table is more than this remnant can bear. My husband dines on Frosted Flakes in our bedroom, seeking his solace in Barney, Andy, and Aunt Bea; my younger daughter nibbles frozen chicken nuggets while copying AP biology notes; I eat the pork loin that I made, but no one wanted, as I play online Scrabble with Charles, a stranger in Maryland. My elder daughter is living in a maternity home two hours away; her ex-boyfriend is reduced to terse texts about items I need to mail back to him. There is nothing left of the Ingalls family here.

In the kitchen cabinet, there remain several small bottles of red food coloring. I used to buy Kroger’s entire stock since in a small town, hoarding can sometimes become a necessity. I doubt, however, that I will make red velvet cakes again. They belong in a time that has left me, with people who have as well.
I only had an hour to say my farewell—an hour after dinner in which I was allowed to look, alone, at all that God had given me, to hold it close, to see its beauty, and to bid it goodbye. At the time, I didn’t know whether we would face a car wreck, a third cancer, or an unexpected death. I knew only that the pain was coming.
I thank God that He allowed me one last look at all that joy. For what joy it was. 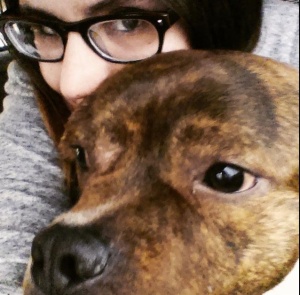 Three days ago I had a dog.

Four weeks ago, I had a daughter.

One and twenty one. Pup. Adult.

I could press my hand against his flop and brindled muzzle;

Her half-filled cereal bowl (so much wasted milk) sat beside my sink.

His snore a benediction, my nightly au revoir.

The final thing I heard.

Her face–alight from the flicker of a favorite movie–

The final thing I saw.

Now, both are gone.

A quick stripping, a sudden wrench, a dark smash-and-grab

(A stealing from all sides.)

Powerless against their absence.

Two lives I thought to help to save.

Present. In all this absence.