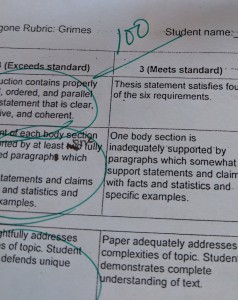 The past six days in my classroom have been days in which I have had to fight myself to do the right thing, to be the right teacher. My fibromyalgia flared right after fall break, so I came into the classroom in a position of weakness rather than rested strength. I didn’t want to have enthusiastic conversations about cruises and car rides and long naps and Netflix. I wasn’t up to greeting forty students by name between classes and then teaching one hundred and eleven for seven hours.

I have spent more than twenty years in classrooms, and sometimes, I feel them all.

This year, I’m on extended day for the first time in my career. In many ways, it is the best thing that has ever happened to me–there’s nothing like forcing an ENFP to focus–but having no planning period is really difficult for an English teacher since essays take time to grade. (Don’t ever sit down with a stopwatch, time yourself grading one essay, then multiply the minutes taken by the number of students you teach. That math is soul-crushing.)

Last Monday, the easiest thing for everyone would have been for me to say, “Since we finished reading Antigone right before fall break, we are not going to write essays about it; we are going to start something new.” We all would have been thrilled. The kids didn’t really like Antigone (my fourth block dubbed her “Sad Incest Baby”), and not grading 52 essays was much more appealing than grading them.

It was win-win, a simple call–one no one would have known I had made. But it wasn’t the right call. They wrote the essays.

I spent Saturday in my younger daughter’s bedroom at her cactus-filled desk. Her vine-covered window overlooks a walled corner of the yard. It’s kind of like Mary Lennox’s Secret Garden of my youth, and if I have to spend Saturday grading in a garret, cats and cacti and walls with vines make the task bearable.

The thing about grading writing, really, is this: assuming the students have “bought in to the assignment,” it’s like they are parading in front of you, telling you what they know and what they don’t. So they were there with me with all things they’d noticed: “Mrs. G, Antigone knew what she was getting into, she knew she was going to die–but Creon did not know at all. And he lost his whole family in one day. And it was his fault, and he knew it. He definitely had it worse.” “Mrs. G, Haimon killed himself when Antigone died, so he must have really loved her–because you are not going to kill yourself after the death of someone you don’t love.” “Sophocles was a deeply disturbed man.”

Granted, it was a mixed bag–there were papers that lacked theses or text evidence; some were sloppy and rushed–and there were a few A+s that the [standards-based] rubric gave that I myself might not have, but the papers were, as a whole, mostly good, effort-filled work that the kids could be proud of.

We had all done something we didn’t want to do.

Though I had planned on church, when the kitten woke me, Greg wandered in the bedroom. He said, “If you can’t go back to sleep, maybe we could go over to Mallery Street Cafe. ” It is in nearby St. Simon’s and was a respite for us after Stephanie Grace’s death, as close to a “spot” as we have gotten in decades. We can eat potatoes and look at art and dogs–and we can remember or forget. 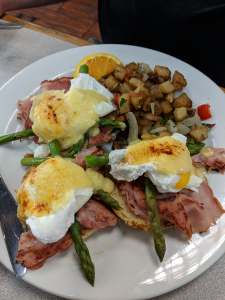 We drove over with no music. We have never needed music–not when I was nineteen, not now at (almost) forty-nine. We ate our eggs and potatoes, then wandered to the pier where we admired a fat chihuahua and a pony-tailed toddler. We sat at the pier’s end and watched a shrimp boat trailed by hundreds of birds.

We didn’t talk then.

We watched it for a long time and thought about alternate lives.

All that time we have spent doing things we didn’t want to do.

This morning, I was so sullen. (Surely someone who loved me in 1987 could have taken me aside and said, “Listen, if you teach school, you will get up before the sun for the rest of your life,” then shaken me and said, “Don’t do it! You need to sleep!“) It was awful, so bad that Greg even gave me a kind motivational speech: “You’ll feel better later.”

At 7:35, I sat at my desk and ate egg and mushroom muffins. I read Daily Mail about the Bloomingdale wedding. I looked at the bride’s mother in her navy blue-tassel covered dress and thought about how I could have had that life, drawn her straw.

At 8:05, the students were released from the gym and cafeteria. They came tromping down the hall as either half-asleep zombies or hyper puppies. There was no middle ground.

I stood beside my door, half-heartedly greeting them. Some students I taught last year passed me in the crowd, then hollered back over their shoulders, “Shavon wants you to dab.”

I looked at them blankly–feeling fifty, overweight, and tired–but, oh, their shining eyes.

There’s a lot about wanting that you don’t understand until adulthood–when no one cares what you want anymore. Your childhood full of sandwiches with the crusts cut off, shoes tied just right, and evenings playing favorite games ends–and a meet-your-own-emotional-needs world begins.

We have so much power: to give peace at a pier, happiness in a hallway, to simply do right.  And while it’s awfully tempting to choose to say no and remain passive when our own needs are not getting met, it’s not right to deny others simply because we ourselves are being denied.

Late yesterday afternoon, my classroom door opened. The bright-eyed girl stood there, chuckling. “I just wanted to say, Mrs. G, your dabbing was the best part of my day!”

Her laughter echoed even after the door had shut. 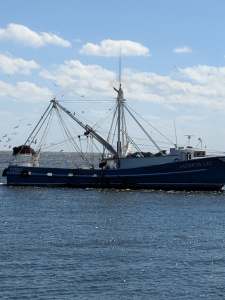 In recognition of World Day of Bullying Prevention, I’m reprinting an op-ed that was originally published on Friday, November 6th, 1998, in the Atlanta Constitution. I wrote this editorial in response to a bullying victim’s beating death and another student’s suicide. Their names are omitted to avoid reopening their families’ wounds. (To my bullies who have apologized, this is not meant to reopen your wounds, either.)

Born with brain damage, uncoordinated and overweight, I found school a nightmare where, from kindergarten on, my friends were the fat, buck-toothed girls. They were the only ones who were kind, because they, too, knew the agony.

Like most parents, my mother told me to ignore the taunts, while my father taught me at an early age that “sticks and stones will break my bones, but words will never hurt me.”

But by sixth grade, I would have willingly been stoned just to have had a square dance partner in PE. Like ———, who committed suicide in 1994, and ———-, who died Wednesday after being beaten by a 15-year-old, I found that words did hurt–and that my teachers and my parents didn’t understand the torment because, after all, ‘kids will be kids.’

Beyond adult platitudes, there’s the child reality, in which 180 days a year of eating alone at lunch, being chosen last for teams, having hair pulled, glasses stolen, and jeering taunts become simply too much. If my principal had made pig noises while my fourth-grade teacher ate her lunch, perhaps she would have understood. If someone picked the back of my science teacher’s neck with straight pins as he worked at his office desk, he might have glimpsed the reality of my life–because there is a point at where the intolerable actions of others make the thought of living unbearable.

Like ————, I became “tired of it.” When my shoes were stolen and thrown on the school roof in eighth grade–my ninth year of enduring mindless torment–I reached my breaking point. I ripped open the door to my science classroom, stormed upon the boys who made my life miserable, and yelled, “I have had it!” I think I threw books: I know that night was the first of many I thought of suicide.

The transition to high school helped some–a 240-pound ‘nerd’ who read a book a day, I was still an outcast, but at a larger school there were more kind people. My English teacher, Mrs. Dillard, encouraged me to write–and capturing my torments on paper lessened their power. Raff wanted to be my lab partner; Julie, a cheerleader, took me to her hair stylist for prom, and Mark, the drum major, sat with me at lunch–these people chose to be bright spots in my otherwise dismal life, and I am convinced they kept me from taking —–‘s way out.

I needed a place to confess how hurt I was, what the years of ridicule had done to me–and I also needed to be accepted for who I was: fat and suicidal, yes, but smart and funny, too. The consistent kindness of a few, over the course of four years in high school, offset the agony inflicted by others. By graduation, though still somewhat depressed, I was STAR student, student body president and yearbook editor–but more important, I knew that there were good things about me.

Now an adult and a teacher of the cruelest of the cruel–middle-schoolers–I am, I hope, succeeding where many of my teachers failed. I punish bullying and harassment, but more important, I take time with the harassed child. I listen to him, acknowledge his pain, encourage others to befriend him–because I remember what it is to be tormented: very real and very painful.

May God be with ——-. May we not lose another child like we did ——-. May we see beyond “kids will be kids” to the child the kids are hurting.