Money has been tight around here lately, what with college application fees, SAT and ACT score fees, and the $16 it costs to tell each college how broke you are using the College Board’s CSS form. The pantry certainly isn’t bare, but is full of boring apples, popcorn, and raisin bran–so Greg and Abby were both excited when, on a recent Sunday after church, I texted that I was bringing home some hot grocery-store fried chicken.

When I walked through the door with the bright yellow box, Abby happily told me that she had invited my longtime best friend to join us, saying,  “Momma bought some chicken.”

I had bought one $6 chicken. Eight pieces. (And grocery-store wings are small.)

Greg and I acted as if she’d invited the Son of Sam to lunch.

“Your mom only got one chicken!”

Abby didn’t understand why we were so mad; she didn’t know that a chicken had only eight pieces. That her dad usually ate three. That grocery-store wings are small.

Even at eighteen, there’s a lot she doesn’t know.

The other night, Abby stood in her small bathroom, raging about college.  She’s applied to twenty-six schools, all thousands of miles north or west. To any college that waives the fee. To state universities “that don’t have Georgia in the name.” To heart’s desire “reach schools.”

She is going far away.

Despite the fact that this has forever been her plan (this is a girl who was drawing scenes of Paris at three), no one in our small town can believe it.

As she applied eyeliner, she ranted, “All these moms are like, “How’s Abby going to survive? My Leslie doesn’t need me as much as Abby needs her mom,” and I’m like, ‘But there’s a Snapchat video of your Leslie snorting coke.’ Maybe your kid isn’t dependent on you, but she is dependent on other things–boys or drugs or partying–maybe she does, in fact, need you and you just won’t see it.”

It is amazing to her.

After twenty years in the classroom, it is time for me to yell, “Amen.”

Those of us who spend decades knee-deep in teenagers learn the mischief they create (“I just drop my cell phone whenever I need a new one, and then I tell my mom it broke.”); the things they believe (“My dad would rather see a beer than me.”); the people they admire (“My Papa is kind, but he is also tough.”); and the things they do (“I snuck out at three AM.” “I met a guy on the pier in Florida, and we went off riding.” “I bought my girlfriend a pregnancy test last night.”).

Of course, we report what we hear and see. We pull students into the hall for quick chats; we hand them Post-it notes with scrawled pleas–“Think about your future”–and stop by ISS, where the kids can’t escape us, and whisper long speeches about choices and decisions. We tell them, “You are going to break your mom’s/grandma’s/auntie’s heart.” We sometimes care too much.

So we nearly lose our minds when parents don’t seem to care enough.

Because, above all, teachers have to be polite. Always. We have to measure our words, phrase things kindly, restrain the urge to scream, “Don’t you see that your child needs you?”

We have to censor. I am censoring even now.

And I just want you to know how hard it is, especially when I am considering my daughters’ classmates, children I have known since they were four, whose hair I have brushed, whom I have fed pancakes, whose knees I have patched with band-aids. I love these children, and some are imploding, and I can’t say anything because IT IS NOT POLITE.

There’s something in South Georgia permissive parental culture that says, “I drank beer by the river as a teen, and I’m okay.” “I went to that cheerleader’s house when her parents were away, and that party was wild, but hey, I didn’t die.” But there is nothing wrong with holding your children to a higher standard than you held yourself; to do otherwise is to allow your seventeen-year-old self’s decisions to impact another seventeen-year-old child–who needs, desperately, for his forty-two-year-old father to show some judgment and some interest.

What parents need to tell honestly one another is something along the lines of, “If my daughter starts to lose her mind, I want you to tell me. If you hear things about her or see pictures or just get suspicious, I want you to let me know. I won’t get mad at you. I promise not to hate you. Just help me before things get too bad.”

We care more about Sunday church-pew appearances than Friday night realities, and it shouldn’t be that way. 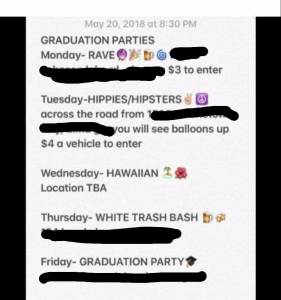 Last week, as students piled in my classroom, they were chattering about the previous night’s parties in a neighboring county. Their social media feeds that  night were evidently full of drunken kids, including middle schoolers, and their worldly sixteen-year-old minds were blown.

“There are going to be parties all week, Mrs. G.”

Loudly unspoken was the “and you have to do something.”

I warned parents on Facebook–as did that county’s sheriff. He said he’d called in the Georgia State Patrol, but more importantly, he reminded parents to be parents, ever so politely, since this is the South: “Nobody wants to get a late night phone call that their loved one has been killed or placed under arrest for any reason. So parents and young adults please help me in preventing any of this from taking place.”

It is true that soon enough, our children will be hundreds of miles away on campuses full of drugs and frat parties and kegs and one night stands.  But they aren’t there yet. As the sheriff reminded us, we parents are still in a place to prevent–literally, “to hinder before.”

And that’s what we should do.